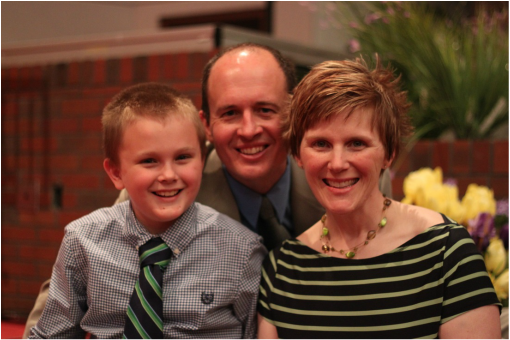 Joy was born in Nashville, Tenn., in January 1975, the only child of Mark and Gayle May. Her parents met at Gulf Coast Bible College (now Mid-America) in Galveston, Texas. Joy is a PK, having grown up in the church while her father served as a minister of music and youth at Tacoma Church of God in Johnson City, Tenn., and then for a short time as minister of music at Linden Church of God in West Columbus, Ohio. Joy gained a BA in Mass Comm/Journalism from Anderson University (AU) in 1997, and though she felt a prompting toward ministry in her early college years, it wasn’t until an impactful message at North American Convention delivered by Rev. Jeannette Flynn that she accepted the call to ministry in June of 2000. As preparation for that call, she attended the Anderson University School of Theology, graduating Summa Cum Laude with a Master of Theological Studies degree in 2003 with distinction in theological studies while working for AU in their Publications Department.
Joy met her husband Steve the summer of 2001 while she was in seminary. A mutual friend in the ministry introduced them when Joy traveled to Springfield, Ohio, to help do a vocal music recording for CBH. They immediately built a long-distance friendship and became engaged in just four months. They were married in Park Place Church of God in Anderson, Ind. in December of 2002.
Steve is a native of Fort Wayne, Indiana, born in May 1974. His family moved to Urbana, Ohio, while Steve was in grade school, when International Harvester opened their plant just north of Springfield. Steve holds a bachelor’s degree in Christian Education (with emphasis in Youth Ministry) from Mount Vernon Nazarene University, and worked for many years with youth and young adults. He held an associate pastor position at Maiden Lane Church of God for two years as Pastor of Young Adults. He also served as a data analyst for Marriage Resource Center (MRC) of the Miami Valley for 5 years, and still uses his teaching gifts and skills to help couples and individuals build stronger, healthier relationships and life skills. Steve is searching now for God’s “right next step” for him, and currently working as a contract teacher and doing small home repairs. Steve and Joy continue to serve as marriage mentors and facilitators for a relationship education class. Steve enjoys hunting, fishing and archery, and prefers to spend his time in God’s great masterpiece outdoors.
The Shermans moved to Springfield in October 2003, when they both came on staff at Maiden Lane – Joy as a full time pastor, Steve as a part-time pastor. After two years, with the pending arrival of a new member of the family, Steve took a full-time position with a local pain doctor providing support in the billing office and continued to serve as a lay leader with young adults for the next year. He shifted employment to a local medical billing practice and remained there until he took his position with MRC. Joy continued on as an associate at Maiden Lane until November 2014, when she took a position as Director of Mentor Services for MRC and teamed with her husband to lead marriage education classes for congregations and other local organizations. She was there for a year, and then, beginning in February 2016, Joy joined the staff at Meadow Park Church of God in Columbus, Ohio, as the interim Senior Pastor. She stayed until MP called their new senior pastor in June 2017. In August 2017, Joy was called as Lead Pastor of Community Church of God in Mt. Carmel, Illinois.
Steve and Joy’s son, Elijah, was born November 2005. He loves math, science and reading. He plays piano and trombone, and loves to sing harmony on worship teams. He's now a proud member of the Marching Aces and Singing 7 in Mt. Carmel and enjoys performing in musicals, competing with the Scholastic Bowl team, and serving in the church. The Shermans love family game nights and movie nights, hiking, disc golf, playing in mountain streams, watching football and playing with their dogs, Moxie and Josh.
Joy has a deep love for God’s Word, for building relationships with people and doing life together, for helping others share their God story, and for helping the church be the hands and feet of Christ in their community. She and Steve care about ministry to the whole family, and they are burdened for the church to “be the body” in the world.